Platform I save the country together with «SIPstarter» 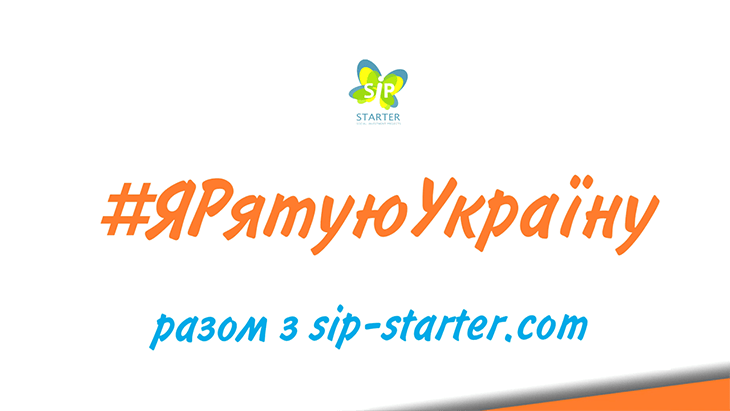 In early spring of 2020, we`ve planned to launch at full power our brand new Social Crowdfunding Platform "SIPstarter: Social Investment Projects", which was in common developed with the International Association "Eurostrategy" for more than two years ago. Its concept provides assistance in solving system social problems in communities and raising finance from various sources for the implementation of social projects and initiatives.

COVID`19 has suddenly divided our lives into "before" and "after". The virus has set a primary task for SIPstarter - to respond to current challenges facing Ukrainian society. The original purpose of the Platform as a transparent fund raising tool remains. Our priority for today is to support Ukrainian communities in overcoming the negative socio-economic and humanitarian aftermath of the coronavirus.

We encourage philanthropists, sponsors, donors, representatives of socially responsible businesses to help the people in need, using "SIPstarter" as a tool. Go to the registration on the site and then join the active Platform work to say with confidence "I save Ukraine!" We will combine our forces and demonstrate public unity in solving social and humanitarian problems. We`ll be waiting for all the country on sip-starter.com. Join with us! 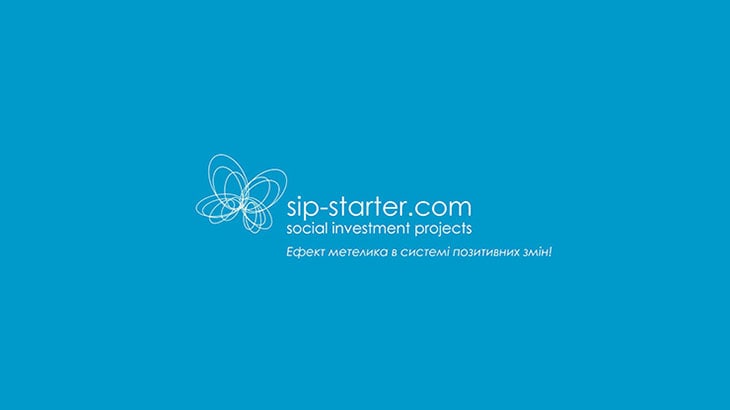 Author: Starter SIP
"From thought to action, from idea to action" - this is the slogan of the International Association "Eurostrategy". In the winter of 2017, it was slogan that served as a vector for starting work on our large project. The idea of creating "SIPstarter" appeared as a response to the challenge and the need to implement large social programs and projects to improve social infrastructure. One of the first projects was the creation of the Odessa regional center for the rehabilitation of people with disabilities. We began to look for new forms of attracting investments and other extra budgetary resources. So the idea of a new format of social investment arose with the aim of attracting and pooling the resources of international funds, donor organizations, business, foreign individuals and investors for the implementation of large-scale social projects in Ukraine. The final goal was formulated as follows: "SIPstarter: Social Investment Projects" is a social crowdfunding resource Platform, a national service for attracting and administering international and domestic extra budgetary resources, which contributes to the implementation of the full project cycle and ensures transparent financial reporting". In order to create a unified, independent, transparent and reliable system of attracting financial and technical assistance to support socially vulnerable groups of the population, the "Social Investment Council" was created in 2017 - a public union that should bring together highly qualified international experts in the field of social investment. Trust in projects on the Platform is trust in the Platform itself. Before the project is publicly available, it undergoes strict pre-moderation. Each author of the project is checked individually. The Platform Administrator enters into an Agreement with each Platform user on the procedure "conditions for using the services, services and functions of the "SIPstarter" platform". You can independently study the information provided by the author of the project, pay attention to the portfolio, accounts on social networks, links to other projects. Everyone can evaluate the results of this long journey to the goal on: www.sip-starter.com. Join now! We attract, create. Together!
20.05.2020
Read more 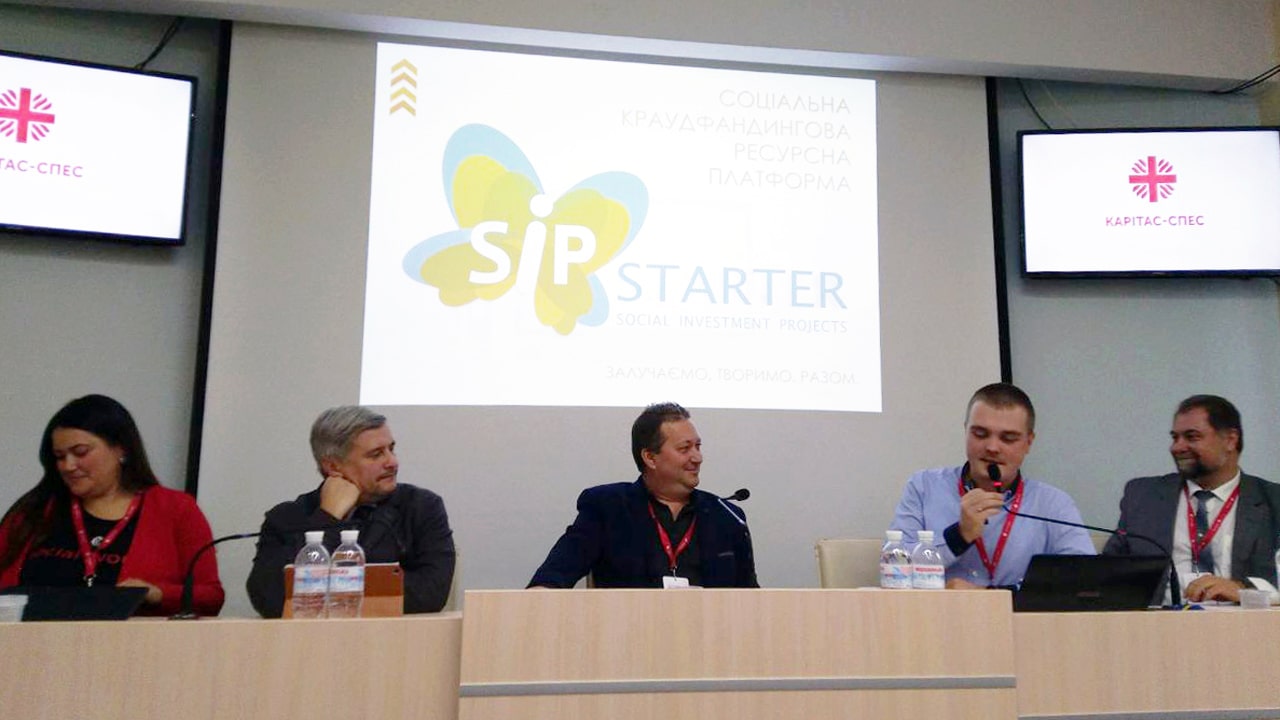 Author: Starter SIP
On November 26, 2019, in Kiev, the "SIPstarter: Social Investment Projects", Social Crowdfunding Resource Platform was publicly presented for the first time. The presentation was held as part of the All-Ukrainian Public Forum "Participation of Active Citizens in the Social Development of Communities", which was organized by the "Caritas-Spes" Religious Mission of the Roman Catholic Church in Ukraine. "Caritas-Spes" is one of the first organizations to sign a memorandum of support for a large project, "SIPstarter", with the "Eurostrategy" and the Social Investment Council. The purpose of the Forum is to present the role of active citizens with faith in the development of communities, presenting projects of social services and engaging local, regional, national and international partners from communities, government and business. In total, about 80 people from 15 regions of Ukraine took part in the Forum. These are activists of religious communities, directors and employees of "Caritas-Spes", as well as donors and partners of the Mission. Leonid Ihnatiev, head of the Public Union "International Association for the Sustainable Development of the South of Ukraine "Eurostrategy" and Sergey Sudnik, chairman of the Public Union "Council for Social Investments" talked about how to attract resources using virtual platforms using the example of "SIPstarter". From "SIPstarter" partners - Concord Bank and the Charity Fund, the forum was attended by Yulia Sosedka, a shareholder of Concord Bank and the creator of the fund, who spoke about the support of social projects from banks as part of the social and corporate responsibility of the business. "We support various projects. Last year, we took 3rd place in the rating of charitable exchanges - precisely for transparency. I am very glad that today I met with so many initiatives that can qualitatively change life in Ukraine. If you save the life of one person, you will save the world," said Mrs. Julia. She also spoke about tithing, which is not only important for believers, but also gave an example of effective support for social initiatives thanks to 10% of the profits donated to charity. "When a priest speaks about tithing, it is perceived naturally. But when a representative of a bank speaks about tithing, business is amazing," said Father Petr Zharkovsky, president of the "Caritas-Spes" Ukraine Mission, commented on the words of Mrs. Yulia. In the second part of the Forum, public initiatives that successfully operate in local communities were presented. "SIPstarter" partners - the social movement Social Unity Public Organization, represented by the chairman Evgeny Okhrimenka, and Vitaly Potapchuk, chairman of Technologies for People, presented innovative models of inclusive solutions for deaf people: "ConnectPRO" and "Sign Language Translator", Which help people with hearing impairments in communication and is funded by the users themselves: "With this model, we destroy the language and psychological barrier between inaudible and hearing people. We provide access to the contact center of sign language translators and make services throughout Ukraine accessible to people with hearing impairment at any time and anywhere", said Eugene. Each user will be able to support this project on sip-starter.com
20.05.2020
Read more